'Tis the for apple crisp. Warm, cinnamon-y, deliciousness, topped with vanilla ice-cream that melts and is like gooey lava love. Yeah. I love this season. This was super easy and delish. Just imagine the cool crisp fall air, the leaves falling and having a bowl of this warm goodness, whilst wearing your favorite fluffy socks. Heaven. I know.

Preheat the oven to 350. Generously grease an 8×8 baking pan with butter.

Place a layer of apple slices in the bottom of the pan and dust with sugar/cinnamon mixture. Continue layering apples and dusting with cinnamon/sugar until done. Toss the apple mixture until evenly coated in cinnamon sugar. The apples should be just about to the top of the pan (they will cook down). 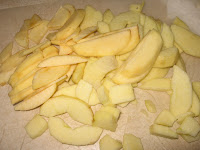 Then make your topping, 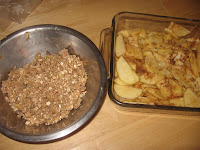 For the topping, place the flour, brown sugar, nuts, cinnamon and oats in a large bowl and stir well with a wooden spoon. Work the butter into the mixture with your fingertips until evenly distributed. Take one full handful of the topping and toss it into the sugared apple mixture. Spread the rest of the topping evenly over the apples. (I usually end up with a dough-like topping that I just lay on top of the apples).


Bake the crisp in the dish on a baking sheet on the center oven rack until the topping is crunchy and the apples are bubbling, 55-60 minutes.
And then....mmmm 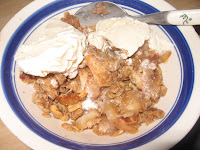 Whatever you do, DO NOT FORGET ICE CREAM. That would be illegal. It would just be wrong.
Enjoy fall everyone :)
smooches, gigi
Posted by gigi at 10:48 AM

gigi
My occupation is freedom fighting. On the down low, when all the blinds are closed and nobody is watching, i pretend i am Betty Crocker!!! I really love baking, i started when i was a student to take my mind off of stressful lawschool studies. Now it makes me so happy! And even better, it makes those that i love happy. There is nothing like awesome aroma of wonderful sweet goodies coming from your oven and filling your home. It is truly lovely. These recipes are super fun and easy. Try them with me, let's be cool together ;)